The Canada Border Services Agency (CBSA) assists Foreign Affairs and International Trade Canada (FAITC) with the administration of the Export and Import Permits Act. This memorandum outlines the requirements and permit procedures for the exportation of goods listed in the Export Control List and for the exportation of goods to the countries listed in the Area Control List.

Section 10 of the Export and Import Permits Act deals with the authorization for amending or altering permits.

Section 13 includes prohibitions under the Export and Import Permits Act .

24. All officers, as defined in the Customs Act, before permitting the export or transfer of any goods or technology or the import of any goods, shall satisfy themselves that the exporter, importer or transferor, as the case may be, has not contravened any of the provisions of this Act or the regulations and that all requirements of this Act and the regulations with reference to the goods or technology have been complied with.

25. All officers, as defined in the Customs Act, have, with respect to any goods or technology to which this Act applies, all the powers they have under the Customs Act with respect to the importation and exportation of goods, and all the provisions of that Act and the regulations under it respecting search, detention, seizure, forfeiture and condemnation apply, with such modifications as the circumstances require, to any goods or technology that is tendered for export, transfer or import or is exported, transferred or imported or otherwise dealt with contrary to this Act and the regulations and to all documents relating to the goods or technology.

1. The Export and Import Permits Act gives the Governor in Council the authority to establish various control lists. This Act establishes the Export Control List and the Area Control List. This Act allows the Minister of Foreign Affairs to issue export permits and to alter, suspend, cancel, and reinstate any permit issued under this Act. This Act also outlines offences, penalties, border service officers' duties, and the application of powers under the Customs Act. It also gives to the Governor in Council the authority to establish Regulations pertaining to the administration of this Act.

2. The Export and Import Permits Act, the Export Control List, the Area Control List and the General Export Permits may all be found on the Justice Canada Web site at http://laws.justice.gc.ca/en.

5. As an exception to the foregoing, applications for permits for the export of logs and pulpwood from British Columbia shall be submitted to the:

Controlled goods moving in transit from the U.S. through Canada

7. Goods in bond arriving from a point in the United States, in transit through Canada, and en route to a third country, must be accompanied by the appropriate cargo control document. This is either Form 7525-V United States Shipper's Export Declaration (SED), or a Shippers Authorization Symbol (SAS)/Company Authorization Symbol (CAS) issued by the United States Department of Commerce to companies participating in the Automated Export Reporting Program. This program allows participants to file electronic export data, on a monthly basis, instead of filing individual shipper's export declarations at the time of exportation. If the exporter is using an SAS/CAS, then the notation "NO SED required, Section 30.39, Foreign Trade Statistics Regulations (FTSR), SAS or CAS__" (i.e., any two alphabetical characters), shall be cited on the cargo control document. In these cases, the goods are considered to be exempt from Canadian export permit requirements. If neither a United States Form 7525-V, a SAS nor a CAS is presented to the CBSA, the goods will be consider as an importation into Canada and re-export to a foreign country, then the exporter will require a Canadian export permit issued by the Foreign Affairs and International Trade Canada to export the goods from Canada.

8. The United States Form 7525-V, or a copy of the cargo control document quoting the SAS or CAS must be filed with the CBSA at the Canadian point of departure. The CBSA will check and date stamp the shippers' export declarations. A sample of Form 7525-V is found in Appendix D.

9. For further information, refer to Item 5401 (Goods in Transit), of the Export Control List, in A Guide to Canada Export Controls published by FAITC and available on the following Web site: www.exportcontrols.gc.ca.

10. CBSA officers and exporters should check the export permit with respect to the following for accuracy of completion (see Appendix A to this memorandum):

11. Border service officers shall date stamp and initial the permit.

12. Once the permit has been validated, CBSA officers should return it to the Strategic Export Control Section or, held in the region, as part of the export report, according to the procedure set out in Appendix E to this memorandum.

14. Necessary amendments to permits may be authorized by the Export and Import Controls Bureau. Types of amendments include: differences in permit and shipment quantities, extensions of validity and expiry dates, cancellations, etc. The Reporting of Exported Goods Regulations (D20-1-0) require that an accurate permit must be presented to the CBSA at the place of exit of the goods from Canada and within the legislated reporting time frame for the particular mode of transportation. For further information on amendments to permits contact the Export and Import Controls Bureau.

15. The CBSA will detain the goods and advise the exporter to contact the Export and Import Controls Bureau when:

16. Under the above circumstances, the goods are not to be exported until a valid export permit is presented or the permit discrepancy has been brought to the attention of and resolved by the Export and Import Controls Bureau.

17. Every person who violates any of the provisions or regulations of the Export and Import Permits Act is guilty of an offence and is liable:

18. Additionally the exporter may be subject to a CBSA Administrative Monetary Penalty System (AMPS) penalty. For example, the exporter could be issued an AMP for failure to provide an export permit when required and in accordance with the legislated time frames or if the information in the export permits is not true, accurate or complete. For more information on AMPS penalties see the CBSA website at www.cbsa.gc.ca. The exporter may also be subject to enforcement action and penalties under a number of other acts and regulations including the Customs Act, the United Nations Act and other acts regulating the nuclear goods licensed by the Canadian Nuclear Safety Commission or items controlled by Health Canada.

19. Questions concerning the issuance of export permits should be directed to:

20. Questions concerning the CBSA administration of these procedures should be directed to:

21. Questions concerning any CBSA enforcement issues or voluntary disclosure should be directed to:

1. The Export Control List is divided into seven groups. The groups are as follows:

2. In general terms, the following goods, when intended for export to the destinations specified, are subject to export control for the purposes set out in section 3 of the Export and Import Permits Act:

3. Items under each group in the Export Control List can be found in the publication A Guide to Canada's Export Controls at the following Foreign Affairs and International Trade Canada Web site: www.exportcontrols.gc.ca.

2. The export of any goods to any of the countries listed in the Area Control List must be covered by an export permit and the goods must not be released until an individual permit is obtained. 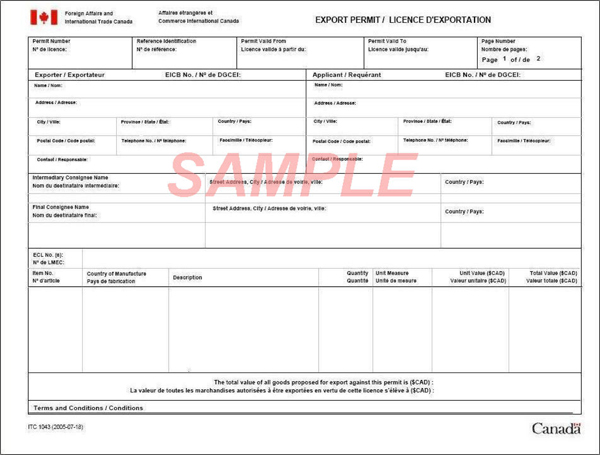 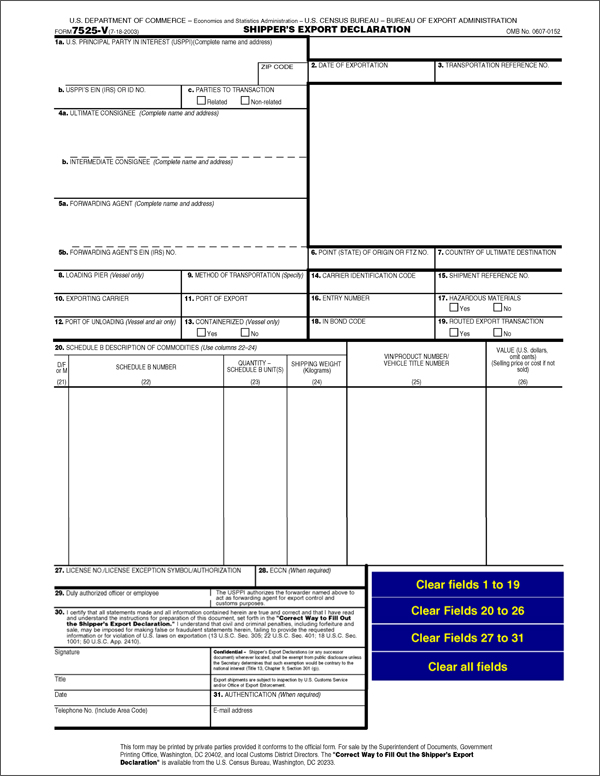