This report highlights the 2017-2018 observations and recommendations of the Canadian Red Cross Society (CRCS), related to its Agreement with the Canada Border Services Agency (CBSA), on the Immigration Detention Monitoring Program (IDMP).

Pursuant to this agreement, the CRCS monitoring activities focus on the following areas:

Under the reporting period, the IDMP carried out a total of fifteen (15) visits to detention facilities holding immigration detainees between December 2017 and end of March 2018. Based on our observations made during this reporting period, CRCS grouped its concerns into the following five themes:

Based on our findings and observations, the CRCS is proposing in this report a number of recommendations, mainly:

During site visits to places where people are administratively held under the Immigration and Refugee Protection Act, the CRCS team monitors and assesses the conditions of detention and treatment of immigration detainees held in holding centers and detention facilities under the control and management of federal, provincial, territorial or municipal authorities. In accordance with the Agreement between CRCS and CBSA, this report reflects the CRCS’ Immigration Detention Monitoring Program activities carried out between September 2017 and March 2018.

A total of fifteen (15) site visits were conducted in addition to responses to two (2) notifications. The majority of the visits took place in Ontario, followed by British Columbia, Alberta and Quebec. No visits were planned in Manitoba during the reporting period. 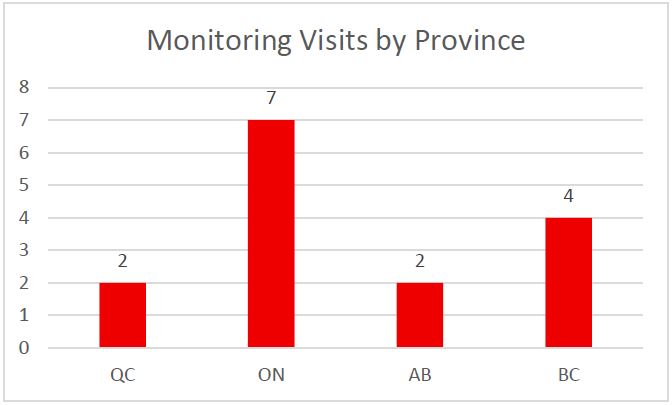 On each site visit, the team interviewed immigration detainees in private and without the presence of any of the facility staff. In total, one hundred and forty-two (142) detainees agreed to speak with CRCS team members whereas one hundred and sixteen (116) immigration detainees were not interviewed, either because they did not want to speak to the Red Cross or they happened to be out of the facility at the time of the visit. 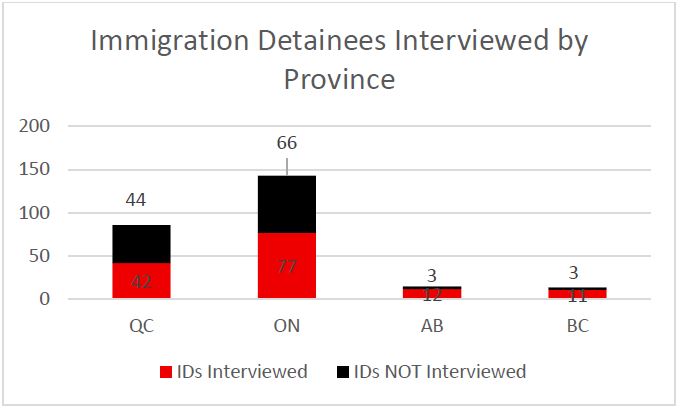 At the early stage of the program, and prior to receiving security clearances, the CRCS organized information sessions for staff and facility personnel who are in direct contact with immigration detainees. Consequently, a total of fifteen (15) sessions took place, with the majority in Ontario followed by the Pacific region (BC, AB), Quebec and the Prairies. 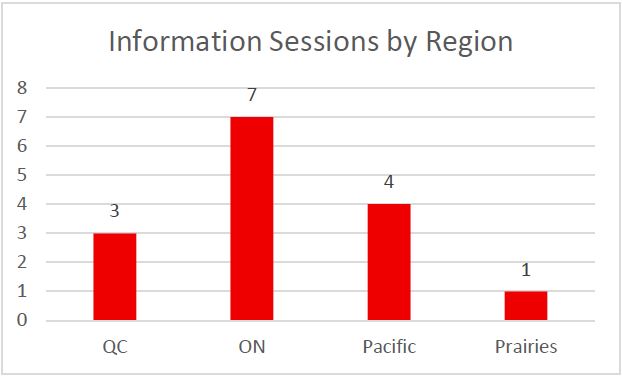 In parallel to site visits and information sessions, the team conducted a total of thirty-four (34) meetings with external stakeholders, including CBSA representatives in the regions, Provincial Correctional Services, follow-up meetings with the Immigration Holding Centers and the Correctional Facilities as well as Legal Aid and local NGOs supporting immigration detainees. 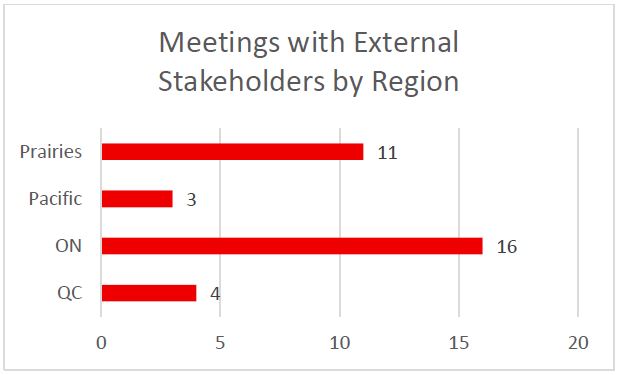 CRCS IDMP carried out a total of fifteen (15) visits to detention facilities on a national level during the reporting period. Following these visits and the meetings that were carried out, the monitoring team would like to acknowledge CBSA representatives and all staff in the visited facilities for facilitating access to all individuals detained therein.

Based on the observations made during this reporting period, CRCS highlights the following findings and recommendations:

The CRCS has been involved in monitoring of CBSA’s immigration detention in Canada since 1999. As an independent and neutral third-party humanitarian organization, the CRCS acts according to its fundamental principles of Impartiality, Neutrality and Independence, providing unbiased reviews and recommendations to the Canadian authorities with the aim to safeguard rights and improve the conditions of detention for immigration detainees.

The CRCS detention monitoring is administered by the IDMP and is governed by the provisions of, and in accordance with, the Contract between the CRCS and the CBSA encompassing the period from June 28, 2017 to July 15, 2019 inclusive. This report presents the CRCS’ IDMP activities, observations and recommendations carried out between September 2017 and March 2018.

Both the findings and the recommendations made in this report are aimed at improving the conditions of detention for immigration detainees in a number of areas, including but not limited to:

CRCS stands ready to discuss the findings made in this report with CBSA and to advise where possible on how to continue improving the conditions of immigration detention in Canada. Additionally, CRC is ready to receive CBSA’s official response on the recommendations made in this document.

In the International Convention on Civil and Political Rights, to which Canada acceded on May 19, 1976, Article 10 requires States to ensure that "all persons deprived of their liberty shall be treated with humanity and with respect for the inherent dignity of the human person" (The United Nations General Assembly. “International Covenant on Civil and Political Rights.” Treaty Series 999 (1966): 171 at art 10). See also the Working Group on Arbitrary Detention, Report to the Thirteenth Session of the Human Rights Council, A/HRC/13/30, January 2010
UNHCR’s Revised Guidelines on Applicable Criteria and Standards relating to the Detention of Asylum-Seekers, 26 Feb. 1999 Principles and Best Practices on the Protection of Persons Deprived of Liberty in the Americas, Inter-American Commission on Human Rights, Principle III.

United Nations, Standard Minimum Rules for the Treatment of Prisoners, UN-Doc A/RES/70/175 (13 May 1977), Rules 20, 40, 77 & 78 Principles and Best Practices on the Protection of Persons Deprived of Liberty in the Americas, Principle XVIII

United Nations Standard Minimum Rules for the Treatment of Prisoners (the Nelson Mandela Rules), Rule 58 Principles and Best Practices on the Protection of Persons Deprived of Liberty in the Americas, Principle XVIII